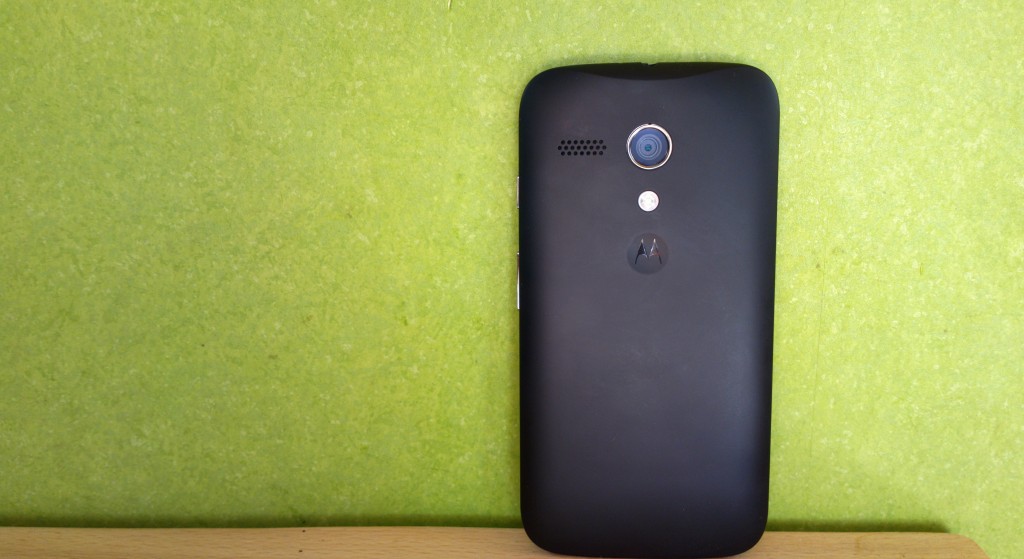 How is a budget smartphone defined? Obviously price is going to be the primary factor but often, with it also comes a plethora of crappy hardware components (specs somehow manages to look good on paper, marketing), tacky build quality, poorly maintained OS and non-satisfactory user experience- generally speaking: a total package that’s not going to last. If this is indeed the case, then Motorola completely redefines what a budget smartphone is with the well-equipped Moto G. There is nary a complaint to be made about the Moto G and in fact, it inherits a number of praise-worthy aspects of the truly innovative Moto X, all on a very wallet-friendly budget. For the purpose of this review, we’ll not be making a reference to the Moto X because it deserves to be evaluated as a standalone product (some countries have not had the pleasure that is the Moto X anyway).
Let’s start breaking it down. 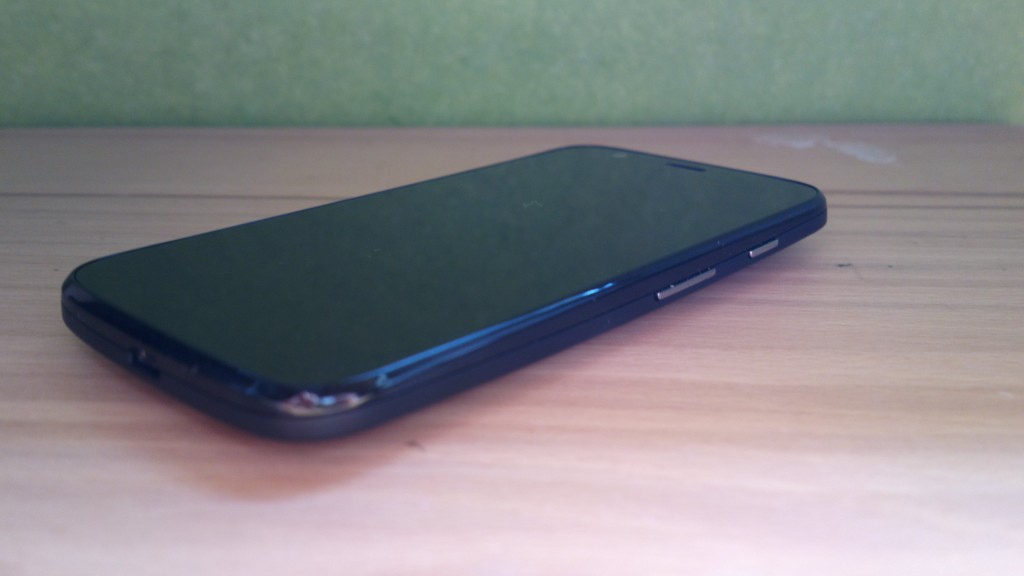 ++++ curved back is ergonomic and fits nicely into one’s palm. And speaking of fitting into one’s palm,
++++ the Moto G’s overall size is spot-on: never too big, and never too small. Being able to confidently use a phone single-handed is a wonderful feeling indeed. A heck of a nice change from those supersized phablets.
+++ Colourful back covers called “Shells” and flip covers are available from Motorola so if you need a different colour or you break one or whatever, just replace it.
++ The Moto dimple on the back is strangely addictive. In reality, it actually does one thing (never thought a dimple could be useful) very well- supplies you with a point of reference for where your finger is exactly. This is useful for preventing unnecessary fingerprints on the camera lense.
+ the Moto G has a healthy heft to it

— the back cover has to be the Moto G’s weakest link. That’s not to say it’s particularly cheap but polycarbonate is polycarbonate. And when you don’t follow instructions, the tendency is that things break. On our review unit’s back cover, where the headphone jack hole bridges the edge has been snapped and we suspect the previous handler, against the manual, pried the cover apart from the top of the phone.
Then again if this does happen to you, just buy a new one from Moto. 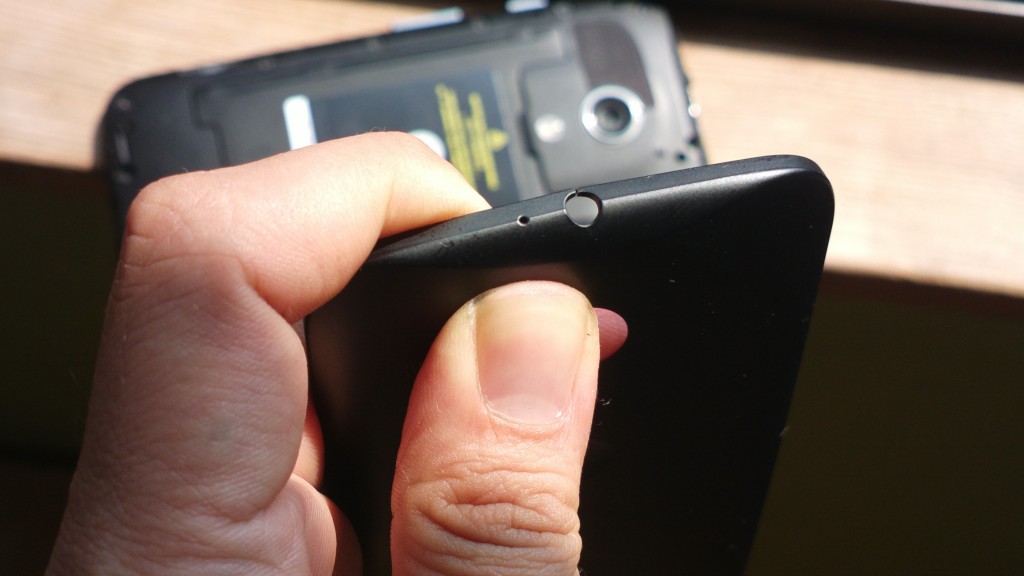 it wasn’t us. really.

– pry open the back cover and you’ll see the battery in its entirety. And yet it’s not user replaceable and Moto goes to length to make sure it isn’t by holding it in place with a stop.
There used to be a time when phone manufacturers made excuses as to why the battery isn’t user-replaceable due to engineering difficulties and whatnot. Whatever happened to that? 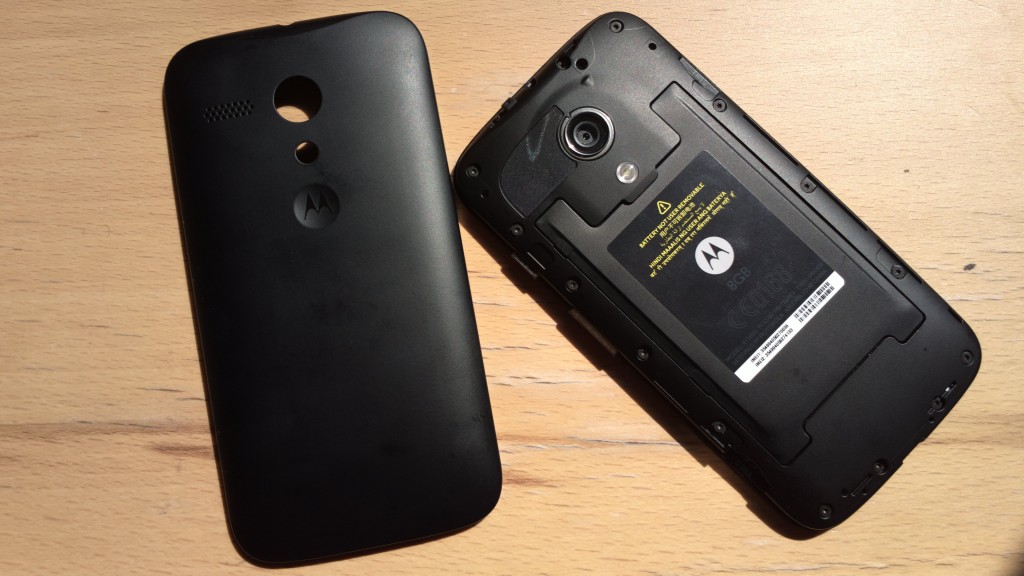 Moto: battery not user-replaceable. so don’t even try it. 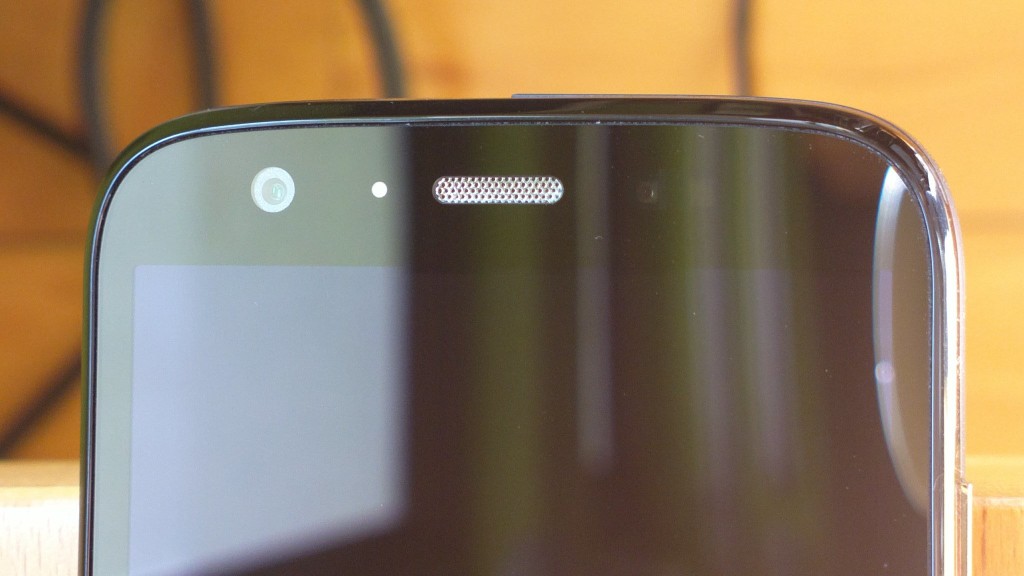 dust in the grill? possible.

++++ images are sharp and you’d be hard pressed to find a stray pixel. Considering the density matches the iPhone’s “Retina Display” pixel for pixel, at 329ppi.
+++ nice bright IPS LCD display with natural colour reproduction. Black levels are as you would expect of a LCD though- not true black and no battery savings by using dark or black wallpapers and themes.

– there’s a noticeable purple tint to the display when it’s switched off.  We attempted to determine whether if this was an anti-glare or an anti-reflective layer but came away inconclusive. Most likely it’s an anti-reflection layer specifically for direct sunlight situations but then it didn’t perform particularly well in that area during our testing.
– edge-to-edge? well not exactly. It’s easy to get away with using phrases like these because the display is literally from one edge to another. What Motorola meant was the display stretches from one edge to the other (actually Moto says all four corners) with minimal measure of bezel. The Moto G doesn’t exhibit this edge-to-edge engineering as there is a fair bit of bezel but isn’t necessarily any worse than other smarphone either. 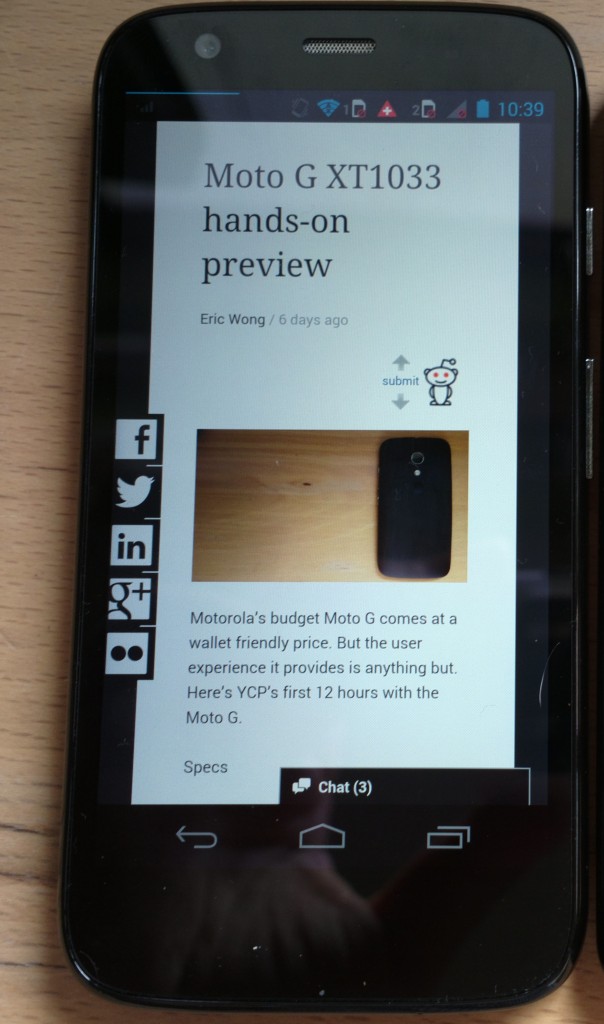 ++++++ Stock Android experience, no resource-heavy skins and no OS-breaking integrations. What more could you ask for?

++++++ Moto G’s Android is quite possibly one of the most modular OS implementations around. Many bits and pieces of the OS are actually available on Google Play store and are updatable separately. For example, the Camera, Moto’s own companion features like Moto Care and so on. While this is somewhat of a tradition with Motorola phones, It’s still highly commendable and shows once again, how much attention to detail and forward thinking Motorola is.

++++++ Trusted bluetooth devices is one of those features where everyone else should be scratching their colelctive engineering heads saying “now why didn’t we think of that?” By pairing and setting a bluetooth device as “trusted”, the Moto G can remain unlocked (requires you to have previously secured it with a PIN / Pattern / Password) as long as the connection is not severed.
Why should you fumble with pin codes every time you want to check your Facebook when the device is either on you of within an arm’s (or around 30 feet, bluetooth) reach? When it drops out of that range, however, you would need to worry- and THAT is when it locks itself.
So whether you’ve got a bluetooth headset or a bluetooth smartwatch or any other personal bluetooth items; Trusted devices will work beautifully.

+++++ Android OS updates are guaranteed because, well, it’s Goog-torola now. Of course, having little customisation AND modular integrations mean updates should come only second to Nexus and Google Edition devices. 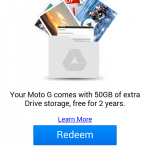 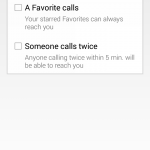 Get a good night sleep…if only the LED would stop flashing though.

+++ Motorola does add value by integrating useful things such as Moto Migrate (to migrate from your old phone), Moto Assist, FM radio hardware (good for those without unlimited data plans to stream music) and 50GBs worth of storage on Google Drive. We especially like Moto Assist and the automation it provides- silencing the phone during sleep hours and meetings automatically. 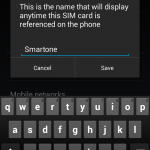 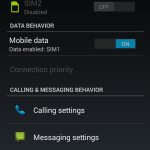 + Dual sim operations are simple and easy to understand. It’ll ask you which simcard you want to use at appropriate times, such as when you place a call.
+ Moto Care- an on-device user manual / helper app specifically for the Moto G also connects you directly to a hotline. Impressive.

— The Moto G lacks a user-expandable microsd slot. This isn’t just “because” it’s a budget phone. It’s limiting the G’s potential.
— Interestingly enough, despit being mostly stock and a general lack of crapware; the 8GB version leaves only 5GB out of the box. sad but true. 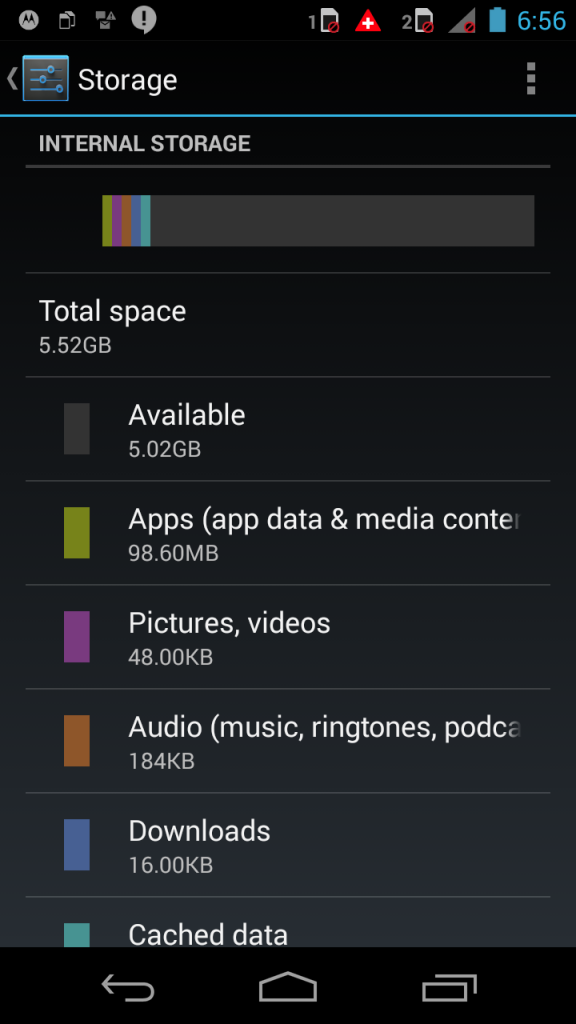 – the LED did not obey Moto Assist’s sleep rule. In that it kept on flashing and flashing all through the night while it was supposed ot be silent. We didn’t have the phone long enough to confirm this bug but then it’s just software and easily fixable via an update. Nothing to worry about.
– the dualsim XT1033 will always show the secondary sim slot status icon on the menu bar, whether it’s active or even have a sim inserted or not. This takes up previous screen real estate.

aww ain’t that a cute dimple

+++ camera UI is nice and simple, gestures for bringing up Options, Gallery and zooming are intuitive.
+ camera quality is fair and enough for snapshots. Just make sure you’re not taking pictures at both ends of the extreme and the quality will come out just fine. Take a look at our camera samples gallery and you’ll see that both poorly lit and bright sunlight conditions do the quality no favours. While daylight conditions perform well and macro / close up shots also look great. 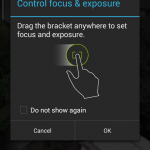 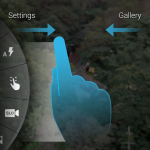 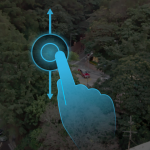 – camera will not cater well to a wide range of lighting condition so beware. 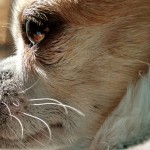 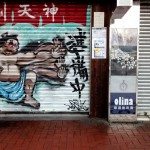 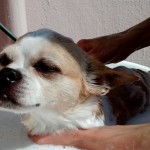 Bright sunlight causes some over exposure and as a result, the dark areas in the background becomes noisy. 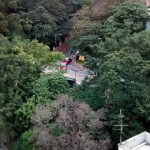 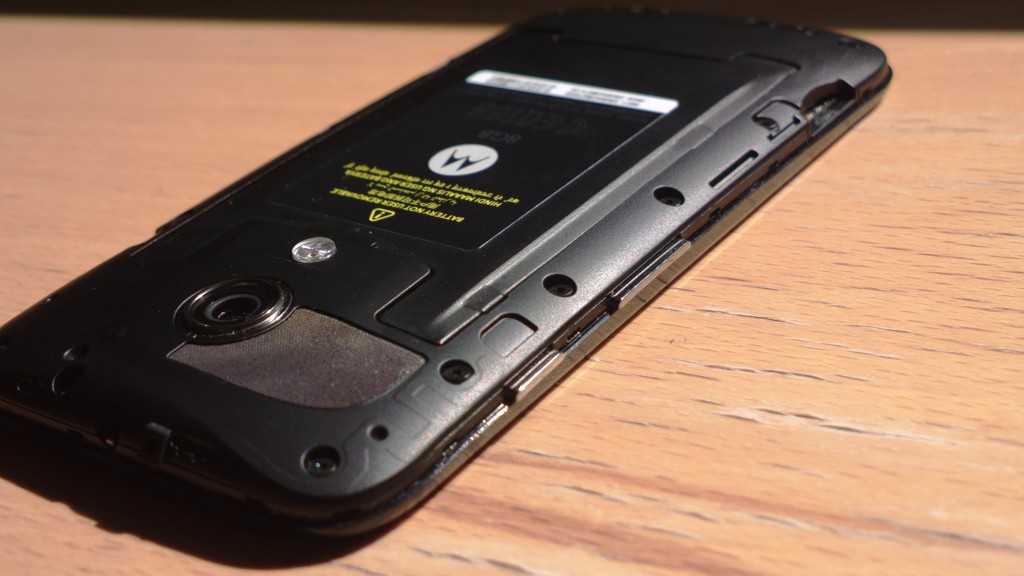 ++++++ the Snapdragon 400 is extremely well-suited to the Moto G. We were able to monitor each core’s usage in realtime during our testing period and quadcore efficiency really shines through. Performance is solid and while not particularly fast, nothing ever lags behind and keeps up well with rapid usage.

The Moto G is no slouch

++++++ The Snapdragon 400 SoC contains 4 battery friendly Cortex A7 cores- in short, power draw efficiency is amazing. Our realtime processor monitoring shows that the cores work side by side during heavy loading, splits up the workload and rarely brings any of the cores to their maximum speed when most power is drawn. As a result, battery life is simply amazing.

++++++ Moto G claims that the 2070 mAh battery will provide up to 24 hours of mixed usage. They say this without any asterisk, no small print, no “tested under a controlled environment”. This ladies and gentlemen is the sign of a true claim. Our very own battery test had the Moto G last around 34 hours with a single sim; and 25 hours with dual sim. So it’s very very safe to say 24 hour battery life is achieveable.

+++++ 1GB ram is good enough, and Moto shows that specsheet-busting numbers aren’t eveyrthing. In fact, with 1GB of ram (and a light overhead) only, apps occupying the memory gets purged at a very reasonable order- a fine balance between keeping apps that are long unused in the memory (and draining battery) and keeping recent apps active without going through a complete reload.