For the price of an inexpensive watch, wouldn’t you like something that can do so much more than just tell the time?

Enter the Pebble Smartwatch. It does notifications, stays connected to your smartphone and remote-controls it, shows you tidbits of your messages and lasts up to 7 days per charge.
We’re here to find out just how well it can do these things to make it a worthy purchase.

Display- LED backlit 1.26″ 144×168 e-paper (NOT to be confused with e-ink! See our Jargon section.)
Sensors- orientation / accelerometer; and magnetometer, ambient light sensor for future use
Connectivity- Bluetooth 2.1; and 4.0 for future use
Battery- 130 mAh
Others- vribrator motor

++++ big protruding buttons are hard to miss and easy to press

++++ water resistance is a necessity, and implemented well. We speculate that it would not have been achievable with a traditional usb port (OR poorly implemented with rubber flaps that have a limited lifetime) 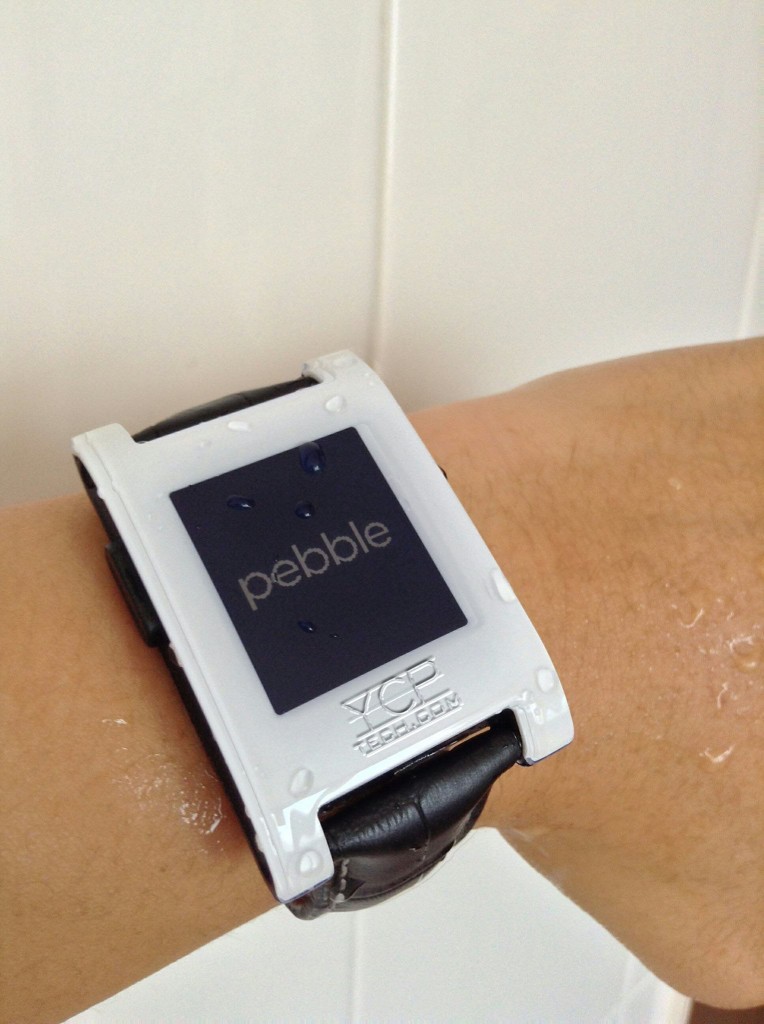 it’s ok. The Pebble is rated Water Resistant 5 ATM- in other words, shower, swim, bathe all you like. just no diving.

+ charging cable is magnetic, similar to Apple Magsafe. This is likely to complement the custom design of the charging contacts on the watch, rather than preventing damage if tugged like Apple’s. 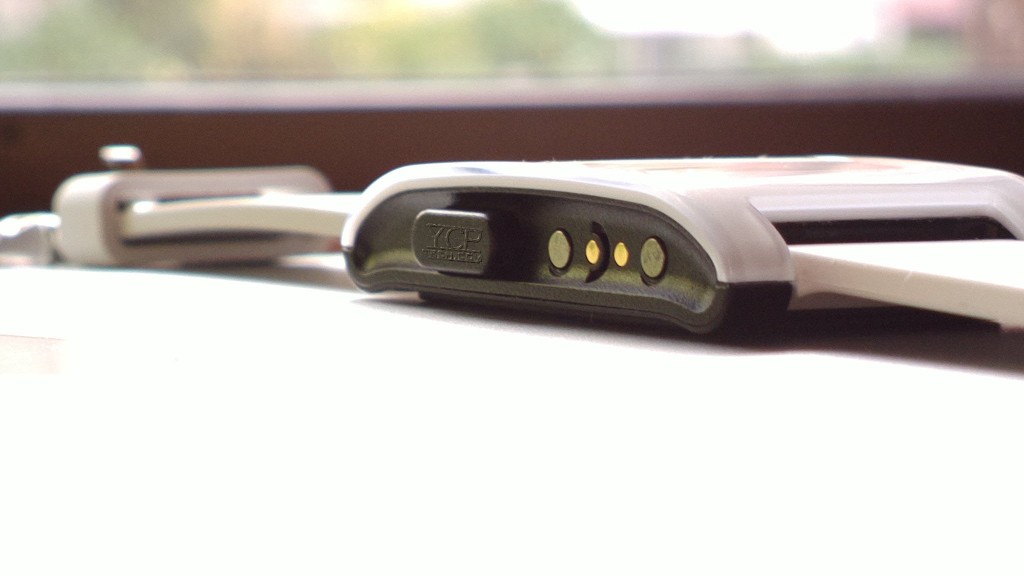 — styling is definitely young, playful and will leave a group of people wanting but not buying. Of course, this is there the Pebble Steel comes in. Having said that, The Pebble Steel should have been released alongside or soon after the Pebble as a choice, rather than as a yearly refresh.
As a sidenote, our review unit came with stitched leather straps but even with matching colours, the styling just didn’t quite go well together.

Leather and plastic- not quite a match.

– non-standard proprietary charging cable is somewhat of a hassle to carry around. While the watch lasts and lasts through a single charge, not being able to top-up with readily available usb cables is still an inconvenience.

direct sunlight- not bad at all!

++++ Pebble’s E-paper display is highly legible under direct sunlight and has a paper-like readability akin to (but not to be confused with) Amazon Kindle’s E-ink displays.

—- when not on or not showing black, the display exhibits a rainbow colour distortion / stain. As a matter of fact, researching into the issue , we found pages of Pebble users in the official forum reporting similar issues. Some say it’s temperature related but our unit was brand new and delivered (well, not manufactured) during a very mild climate period here in Hong Kong.
So far it appears no one has experienced any detrimental effects from this and when the display is on and displaying black, the distortion is not noticeable at all.

seriously now what the heck is that?? glue? pressure?

+++++ The Pebble is all about notifications. When was the last time you missed a call because you were simply strolling down a busy city street? At least it happens often here in Hong Kong. No amount of loud ringtones and special vibration patterns of varying intensities can save you here.
My missed call rate was zero after putting on the Pebble. A personal record. I lost count of how many times the Pebble vibrated to alerts and notifications that I was completely oblivious to.

+++++ The Pebble is scalable in that it’ll accept 3rd party apps. Once you’re done messing around with the built-in functionalities (and that won’t take long),  you have a world of 3rd party apps (and now, an officiel Pebble app store) to dabble into and experiment with. Some examples are- games, social networks, completely re-organised and infinitely more useful watch UI (see Glance), exercise apps, remote control apps (e.g. camera control) and many many possibilities. 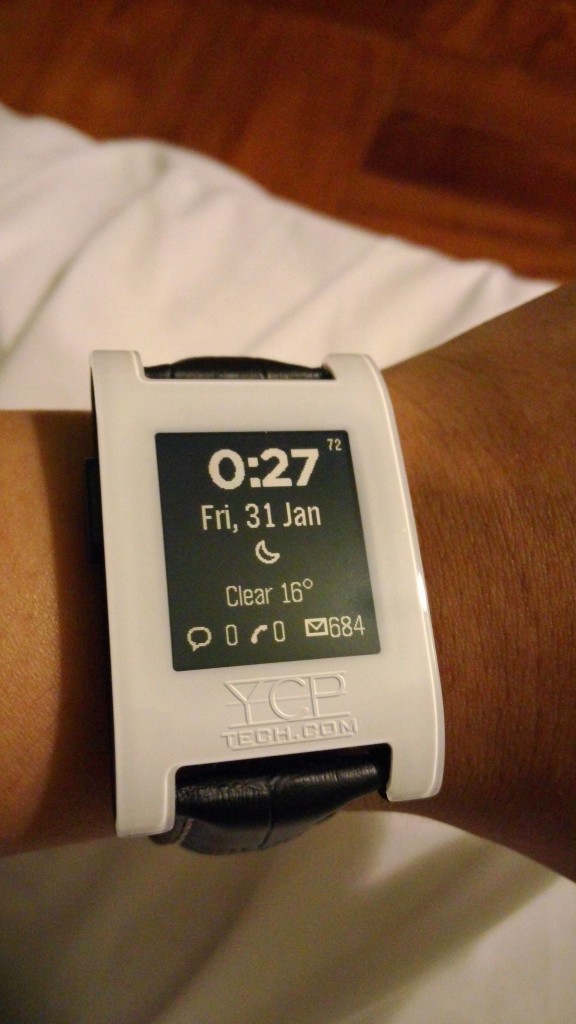 Meet “Glance”. One of the best 3rd party apps that the Pebble should have been out of the box. http://www.finebyte.co.uk/

+++++ Gestures, believe it or not. With the flick of the wrist, the Pebble’s accelerometer is activated, causing the display to light up. This is an extremely handy feature and negates the use of your other hand.

+ stock functionality- without any 3rd party add-ons is fair. You’ve got the basic stuff like changing watchfaces, music controls. And Notifications of course, where you can choose which ones will become alerts on the Pebble and which ones won’t.

— no way to check battery level (without 3rd party add-on). Supposedly when the battery becomes low, an icon will appear and alert you when it calculates it’s got 12 hours left. Either I missed this alert or the calculation was off and I ended up with a dead Pebble for half a day.

— the Pebble can only store a maximum of 8 apps at a time, there’s no room for more. Although iOS’s Pebble app does have a “Locker” for storage and swapping them in and out is not difficult. 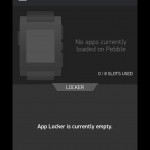 App locker streamlines app management by using the phone as a interim storage.

– built-in Music control is a bit of a mess (on Android). It has to be tied to a specific app in advance, rather than control the currently engaged music player like normal bluetooth profiles do. 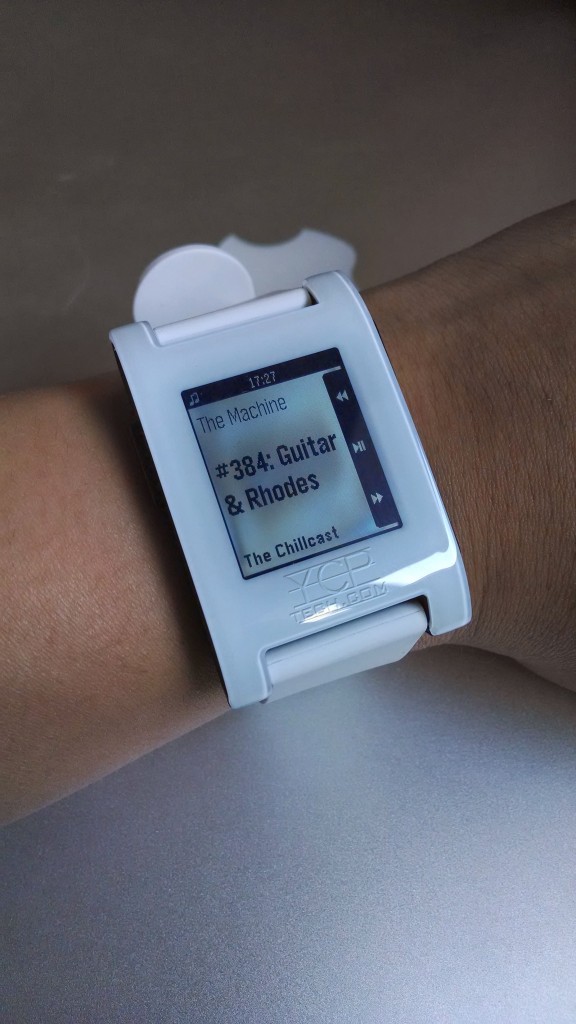 Music control works but is a little clumsy.

– lack of persistent notifications mean if you miss it, it’s gone after a pre-determined time. Fortunately, depending on how you look at it, notifications are not synched both ways. Notifications cleared on the watch are still present on the connected phone. 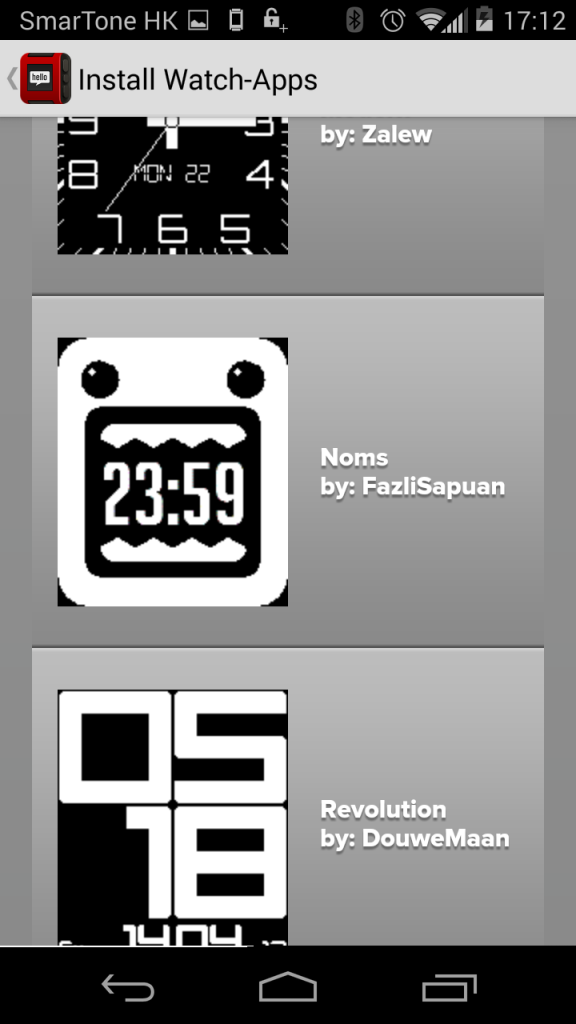 – apps management must happen on the phone, never on the watch itself. 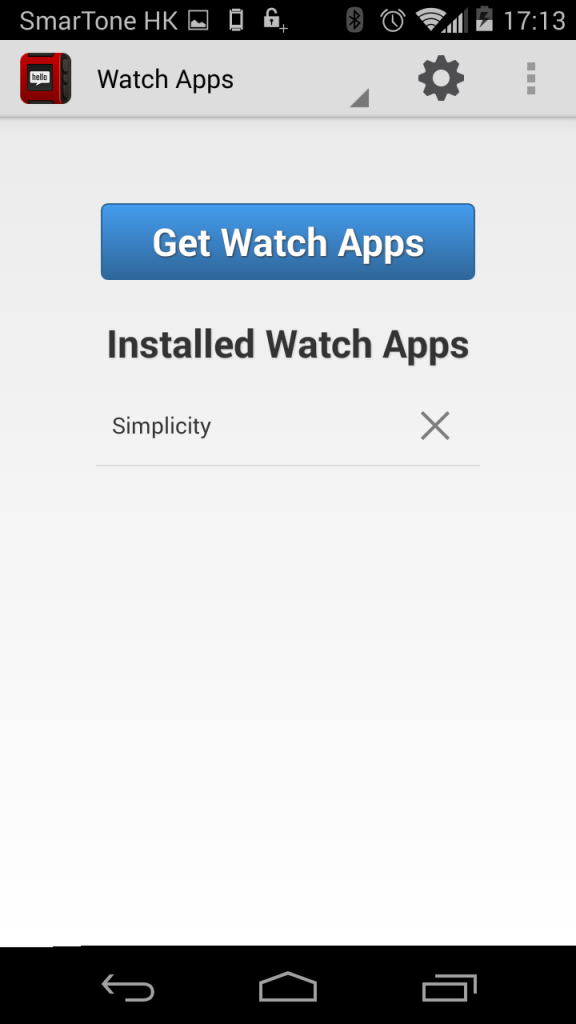 App management is not particularly convenient.

+++++ the Pebble lasted 4 days during our testing, which is more than enough. It’s no surprise with the 3rd party apps we’ve been running and testing that the Pebble didn’t reach its stated 7 days.

+++ UI is simple and moving around between menus never feels slow

+ Pebble worked just fine on a number of Android devices when tested in a multipoint bluetooth environment i.e. we often had a bluetooth headset as well as the Pebble connected to a phone at the same time.

The Pebble Smartwatch is still very 1.0 in terms of maturity but has great potential. The first edition (including the Steel) may not last a terribly long time before demand for hardware sensors (new functions) outstrips the existing hardware package. Either we’re going to see a Pebble 2.0 edition very soon with software maturity trailing behind, or it’ll be overtaken by competitors with shotgun-tactics (hello Galaxy Gear).

For the consumer, Pebble has a foot in the door early enough. While the whole package may still be a little immature, with the support of a large number of developers, the Pebble is set for a rich apps ecosystem to make it more than enough for regular users. Go buy one.

This is one to watch in the years to come.

1. iOS’s Pebble app is better than Android’s. We tested the Pebble right at the transition point between the new Pebble app store release (2.0 SDK / firmware) and this happend to iOS first with Android trailing behind so it’s possible that Android might get iOS’s features in the near future.
But regardless, iOS gets it first. As always.

2. Mind your Pebble usage etiquette. You might be thinking yer I no longer have to pull my phone out and tap away rudely during a social gathering. True.
But never forget what the person sitting opposite you might think if you keep checking your watch!