This is Part 2 of the App Store series and it focuses on how Apple’s iTunes App Store can be improved. Part 1 is here. 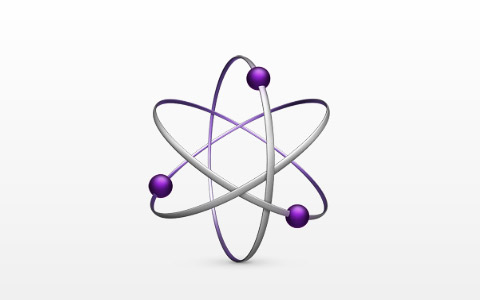 I can’t say it was particularly good but it was there, and under general usage, it’s more practical than “Near Me” that’s occupying its previous center spot right now.

It’s not that Near Me is useless. It’s a very interesting feature that allows you do two things:

So basically it’s social and geographical- it’s a crowd-sourced chart. And it is most useful, as Apple demoed and also points out on their website- for travellers. Say you travel to another city, tap Near Me and voila you’ll have apps that are locally-relevant e.g. Apps for local businesses, local transportation, local sightseeing guide and so on.
For the curious and the nosy, you may even find it fun to check up on Near Me where ever you go just to see what apps people use near you.
So Near Me is fun and useful. It opens up new opportunities to marketers, improves app discoverability and encourages developers to make apps with a localised distance. These are all good things but the problem is that the use cases are not as common as could be. Not everyone is a traveller and not everyone is nosy.

What might have been better is to bake Near Me into Genius itself, to have it as a secondary feature of Genius. Thereby, not retiring their personalised recommendation efforts and at the same time provide a mixture of these two features to users. Of course, one could look at it from a different perspective- that the end of Genius for Apps was good riddance and that it was the herald of something new, something in the works with Near Me belonging to a bigger picture. We can all hope.

For the time being however, Apple has to rely on a more human touch- Apps editors or as I like to think of them- Apps curators. We’ve all benefitted from their work. They’re the ones responsible, among other things, for selecting a bunch of apps according to some magical criteria, and then finding ways to present them to the users in such a way that makes sense in a contextual manner.
It’s all about helping you discover apps.
And let’s face it, and we’ve already identified in our previous article, that Charts are not the best features for discovering apps. If you want to be on the charts, you first need downloads, you first need to be discovered. Without a little intervention, it’s all very chicken and egg.

Surely you’ve seen these before?

Click a section and you’re taken to a dedicated page with a nice bit of graphics telling you what this is all about, along with a collection of apps related to the section title. Like so: 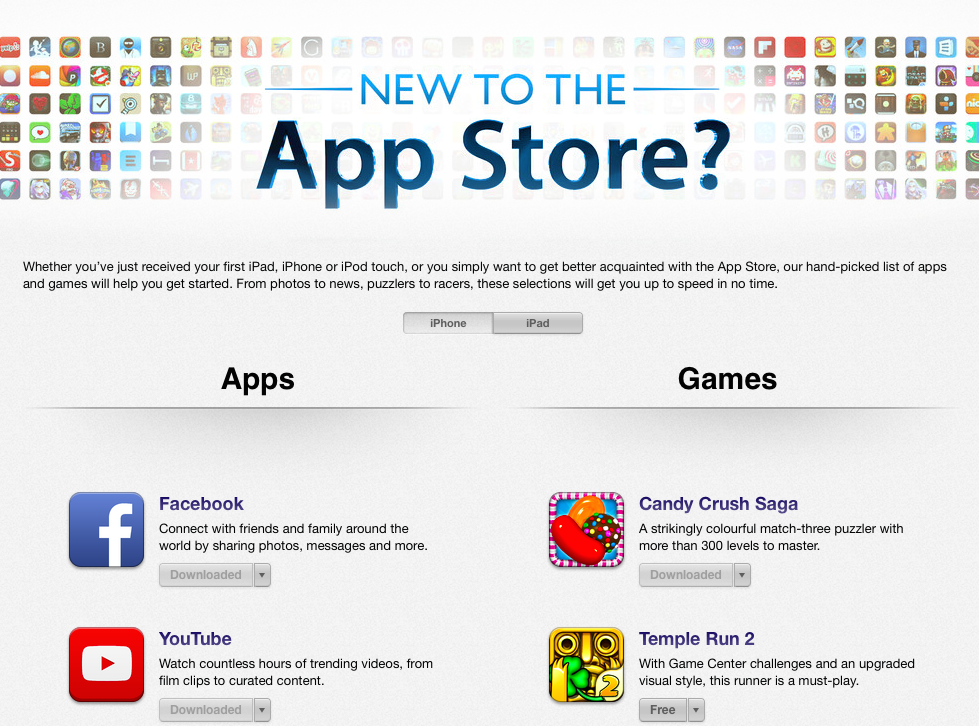 These are great. There are many many more of these littered around the app store and they serve to help people discover apps when they’re looking for something specific. Some of these are expanded listings sprawled horizontally across the app store’s front page too.
There are also Editors’ Choices, Previous Editors’ Choices,  Essential Apps Collections, Apps for learning English, Get Stuff Done etc

Yes they are useful. They are necessary.
But even these highlighted sections themselves will require discovery, especially considering how easy it is for them to be buried under more than a million apps.

As also identified in our previous article in the series, Search in the app store is another area that needs much work. And what better way is there to improve search, than to incorporate editorial sections into the results?
The problem:

An experiment.
A new user joins the Apple ecosystem. Credit card in hand, he’s somewhat tech-savvy and knows he should get his apps from a well-known developer. Such as Apple themselves. What he doesn’t know, is what apps Apple has made. So he does a search by typing in “apps by apple”. Like so:

For those who are familiar with how Apple suggest results in the search box, you already know that this is not a valid search phrase. Because otherwise one of the suggestions would have been “Apps by Apple”.
And so onto the road of failure, here are the results: 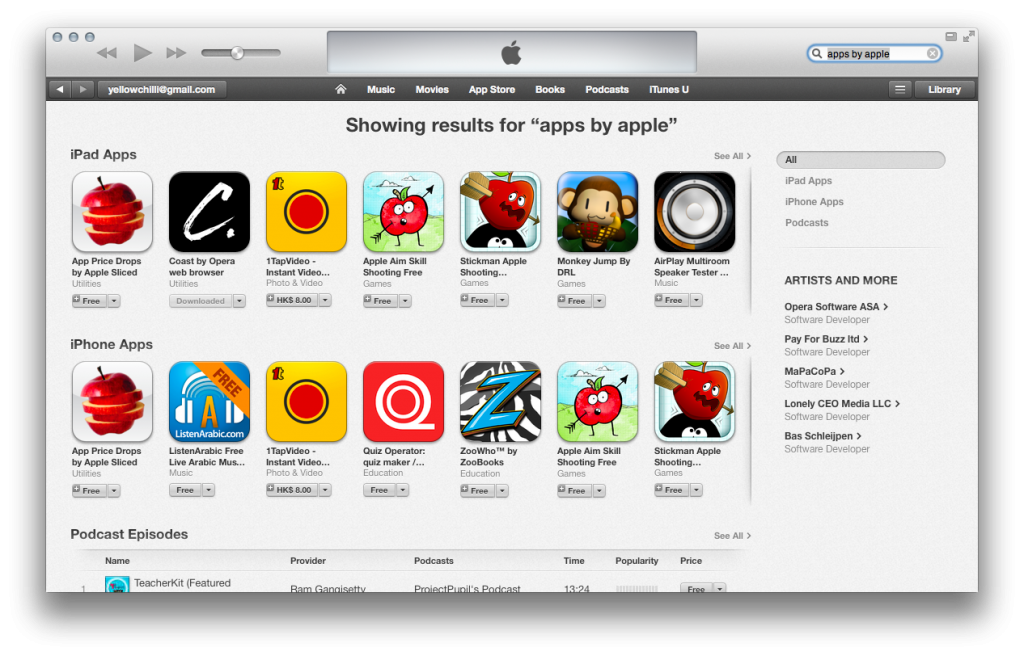 Clearly, the folks at Opera know a thing or two about ASO and how to take advantage of keyword phrases?

These results are poor. Our new user will either believe these are apps made by Apple, or he would have to do further research and eventually find out that these apps are not in fact apps by Apple. Both of these resulting scenarios are undesirable.

So let’s look at our proposed solution-
Integrating editorial sections with search. 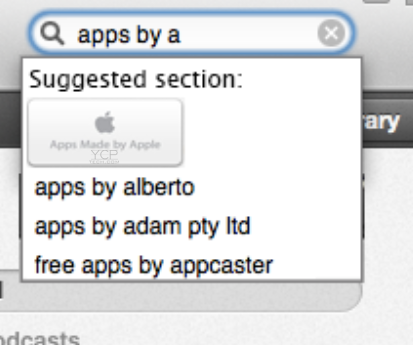 ooo now where did that useful little suggestion come from

Click Apps Made by Apple and you’d be brought right into its section page. 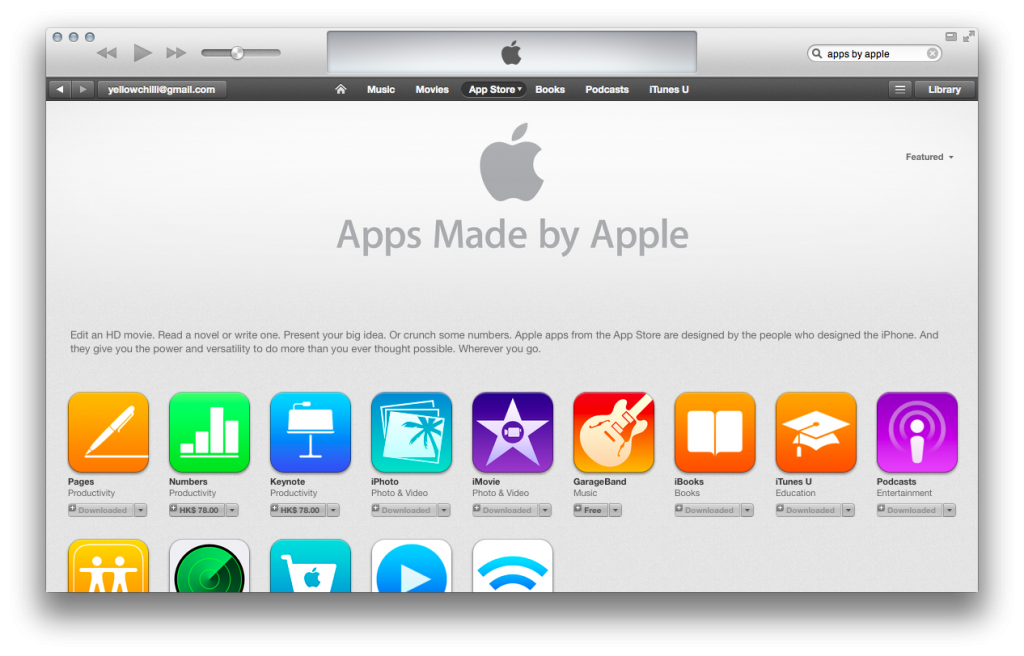 And that, is how editorial sections need to be integrated into search. This can be applied across the whole app store obviously, so that when people search using descriptive phrases, sections pop up as a suggestion.
For example:

and so on. Now when our new user describes what he’s looking for in the search box, he’ll be brought to a relevant collection of apps, chosen by trustworthy App Store editors.
Win-win for the developers, Apple and our new user.

So having implemented a new robust search system, let’s take things further with these editorial sections.

Our first suggestion is to implement time-sensitive events.
Obviously the app store already does this to a certain degree, for example, iTunes Festival. But they can do more.

Pick a piece of news for the week, and collect quality apps that are relatable and create a section for it. The editor would have to be sensitive about it obviously, as there are a number of ways running such a style of editorial can backfire.
Let’s take the recent MH370 incident to create our example.

Section title: Join the MH370 effort
Blurb: If you’re looking for information regarding Malaysia Airlines’ MH370, you have come to the right place. We’ve put together apps that will update you with breaking news, teach you how to spot and identify, and how you can help in the search for the missing aircraft. 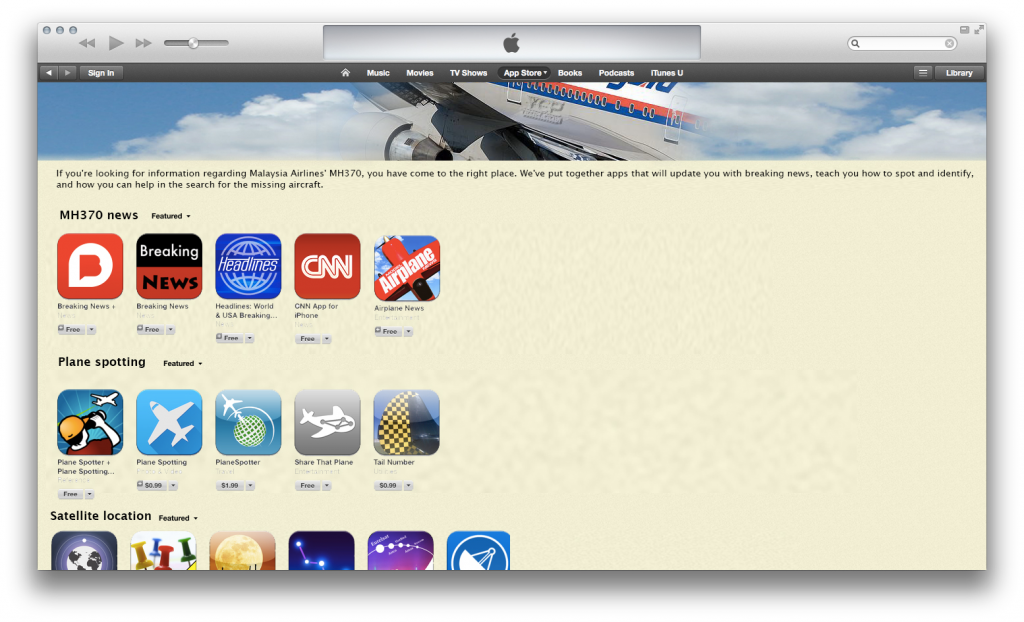 This style of editorial might only last a week or so due to their time sensitive nature, but it’s yet another great way to surface apps that would otherwise not be displayed on the front page.

How do you create hype and excitement and subsequently discoverability around a bunch of apps?
Yes, Apple has their own apps editors doing exactly just that. Users will tend to trust apps recommended by Apple and this applies not just in terms of security and privacy, but also in terms of quality. Editor’s choices are far more likely to be downloaded than other random apps being featured on the front page.

But it’s possible to increase this effect ten fold.

And it’s as simple as borrowing star power from prominent persons.
Consider the following editorial sections, all vetted by Apple’s editors of course:

and so on. Extremely powerful in driving downloads, engaging their fans and ultimately, improving the app store’s apps discoverability.

And finally, a section for the Devs.

So we have lots of great apps and we have Apple to thank for creating such a platform. But we should never forget about the developers who often times poured their heart and soul into creating an app. Some do it for the money and some don’t. Some set out to help people and some use apps as a medium to social experiments.
Whatever the reason, there’s always something in common- they all have interesting stories to tell.  Some who have made it big with their apps will attract attention from the press. But for most, they’ve remained behind the scenes and often forgotten. And it doesn’t mean their app is meaningless and that they have nothing to tell.
For Apple, forming a great relationship with these developers is a logical step. And what better way than to feature them in the app store, not necessarily for their apps but rather for their idea behind the app. How the idea was conceived, what were the difficulties, what they had hoped to achieve and so on.
This then would be the developer’s 15 minutes of fame, free publicity and ultimately, enhances the relationship with Apple. And it would allow the users an insight into what sort of work and brain power goes into creating such an app.

Let’s see what such a section would look like on the app store. We’ll use one of the most interesting apps on the app store as the example- 22cans and Peter Molyneux’s creation: Curiosity.

I admit I’m not a PS expert.. but you get the idea.

So how does that look?
Surely there are plenty other interesting stories out there that would appeal to people but for me personally, I would actually love to watch this particular interview.

And there you have it. This concludes our second article on App store improvements series.

Do you agree? Feel free to chime in if you have any comments.