There’s no denying that all Mac Minis run sluggishly due to its low-midrange processor and slow hard disk. I happen to own the 2010 model but it’s no different. So I thought I’d attempt to offload some IO from the drive as well as speed up my web browsing by relocating Google Chrome and its cache to a SSD drive. 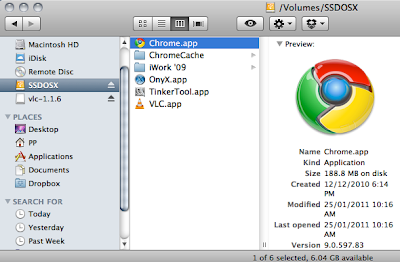 Relocating the application itself is simple enough as most mac users know that there’s nothing complicated like registries in Windows. So all that is required it dragging and then dropping “Chrome.app” (yes i renamed it) to the desired drive- in my case the SSD.
Now starting Chrome feels faster. Problem is, its cache location is still on the internal drive, somewhere around ~/Library/Cache/.
Now this is where it things would have been easier in Windows. Create a shortcut, add –disk-cache-dir as its switch and voila. A saved icon that’ll work every time.
Under OSX however, the only solution I have tested that is working, is a Terminal command. Couldn’t save it as an executable script…couldn’t get Automator to work… Just Terminal.
and here it is:

Just change the paths. I renamed “Google Chrome.app” to “Chrome.app” so that the command would accept it.
yes it ends with an Ampersand. And yes I have to open Terminal and type or copy and paste all that every time I need to run Chrome the way I like.
If anyone knows better, then please do let me know. 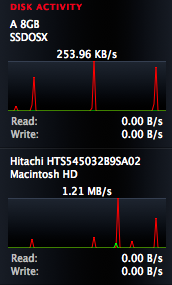