Discovery: to find unexpectedly during a search.
The current state
Since it was Apple that began it all with the iOS App store, I’ll use them as the prime example for this article. It is not my specific intention to criticise and name a certain company, but rather to apply similar principles to all app stores i.e. Google, Microsoft, Apple, Amazon etc
Most app stores these days share the same problem- apps discoverability. Sure, consumers may be happy with looking through charts and feature lists but developers- the ones who have invested vast amount of resources into their apps would want to know that their apps are being discovered, whether by organic means or no.
Often, this is entirely down to the mercy of these app stores how the new arrivals are presented. There are a number of obvious ways how this can be done e.g. feature lists such as “New and noteworthy” and lists that plainly show new arrivals without any particular context.
It would appear that Apple is not yet making the best out of their appstore, however. Strangely enough, for a company that almost prides itself in their strict app approval system, they’re not displaying much confidence in showing off the new arrivals. Versus, Google should not have the same confidence because of their relatively relaxed approval system. By doing so- exposing new apps that might contain issues- would damage the trust and confidence consumers have for them.
And yet, new apps arrive everyday in such huge quantities, there are many potential problems if all of them were listed or featured. So are app stores doomed to be a victim of their own success, destined to be buried by a sea of irrelevant apps or drowned by them during the curation process?
the problems
Some of the challenges app stores face in exposing new apps are listed below:
There are 3rd party reports of zombie apps- where “two-thirds of the appstore’s 900,000 apps are never downloaded and installed on consumer’s devices”. Assuming this claim is credible, the app store has a real sustainability problem.
solutions?
the input
In Apple’s case, invest in a social network. it’s a pity that iTunes Ping had to be shutdown, otherwise if it had lived on, there would’ve been an infrastructure for Apple to build upon to create incentives for filling in more personal data. Metrics that Apple needs for better profiling of their users hence in providing better recommendations.
Surely Genius for apps would have been greatly enhanced by such data, that is, if Apple isn’t replacing this recommendation system as well in the near future.
Speaking of personal data, Google is on the right track since they own so much of it. Every user is presented with incentives in providing Google with that little bit more data via each service. Consider just two services- Google+ and Gmail and how complete a profile Google can already build out of data from them alone. Whether Google is leveraging on them is another matter (doesn’t seem to be the case at this time).
It’s may not be necessary and nor justifiable to use per-user profile data for anything but it’s great for identifying trends and knowing which consumer group would most likely find relevant.
This is a case of waiting for data to populate over time- passive; versus taking readily available data from profile database and building different lists of recommendations from that- active.
the output
1. recommendations
hand-picked, tailor-made suggestions in combination with access to a database of rich user data. Human input is necessary, we’re not at a stage where there is an AI capable of learning human experiences or a predictive algorithm comprehensive enough to replace human input.
While Apple already has app store editors curating feature lists, they can only make the best of the relatively limited profile metrics available.
system/algorithm generated recommendations also need to be more intelligent (and less lazy). The Apple app store here opts for showing “Top free (related category) apps”- which is actually a great idea. The most undesirable scenario- user downloads an app, and the related/similar section displays a bunch of apps with overlapping functions e.g. Twitter app versus a list of 3rd party Twitter clients.
But showing similar apps isn’t always a bad thing. Because some people do like to test out new apps. And this is where per-user profile data is most useful. The system algorithmically determines whether a particular user is prone to trying out new and/or third party solutions and hence be presented with a simple “Similar” list.
2. make full use of error pages
In a web browser, when you type in a wrong url address, you’ll most likely be greeted by a customary “Error 404’ page. The most meaningless, pointless page on the internet, surely?
For retail websites and services, this becomes a huge wasted opportunity and possible loss of business if there is no custom 404 page.
let’s examine how app stores handle errors

for errors that are impossible to guess: 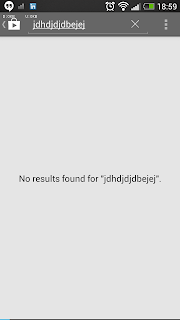 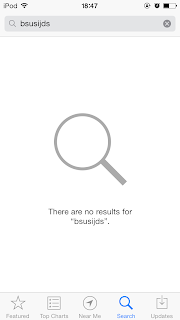 how it could be: 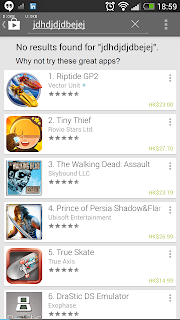 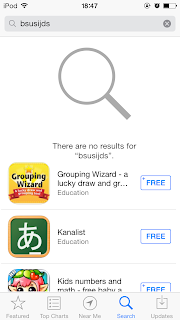 for errors that can be guessed, Apple and Google are already doing a really good job: 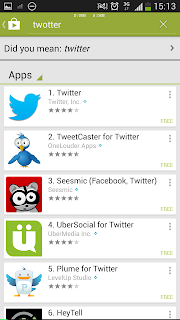 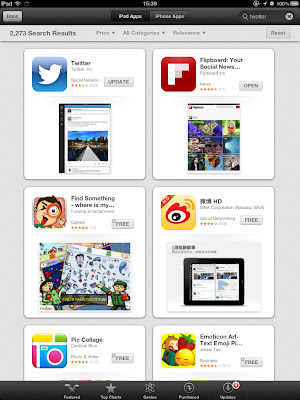 Another area with room for improvement- related apps:
3. a more robust search system
Sometimes consumers search for things specifically i.e. the name of an app, such as “Twitter”. Sometimes they search using a keyword of what they want to do i.e. “chat”
App stores need to take advantage of these to finetune the search results in order to expose lesser known apps, e.g. apps not on charts.

Regardless, one thing they can do relatively easily is have a search engine that tries to understand what a user wants. They can do this with live suggestions. Let’s see who’s taking better advantage of it:

how it could be: 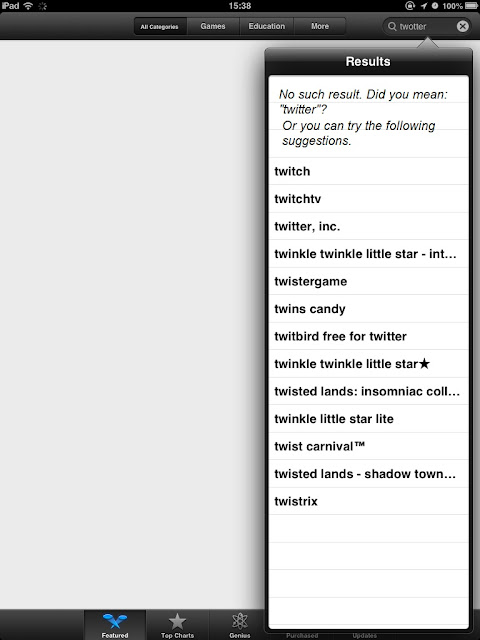 4. charts set in more appropriate time periods
e.g.
instead of setting an All time top paid chart, use Top paid this week, month, or even quarter.
Newer apps will never be able to compete with yearly-accumulated numbers set down by top-selling apps so as a result, it’s a lose-lose situation. Using charts based on shorter time periods and possibly barring older, more established apps from appearing on the chart should ensure a nice shake-up.
Older best-selling apps belong to a different chart of their own, such as “Hall of Fame” or something to a similar effect.

App developers are well-aware of the benefits of being featured by their app store and all aim to do just that- get featured. There have been reports of how getting featured gives app downloads and potential revenues a huge boost.
But there is only so much space in pre-defined feature lists lest they risk creating a sense of clutter. App stores must make better use of the limited screen real estate to expose these lesser known apps- in a sense, to help them help themselves.