Does your iphone /ipod /ipad feel slow? Does it seem to be skipping app startup shutdown animations? Does it stutter when you scroll through lists?
If so, try the following.

-clear the browser cache- you’ll be surprised with the instant boost.
-and then just to be safe, do a *proper* reboot of the device.

Clearing the Browser cache
So just in case and because I’m nice, I’ll include some step-by-steps.
1. hit Settings then Browser 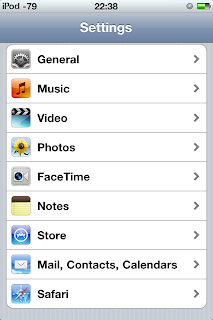 2. scroll down a little and tap Clear Cache 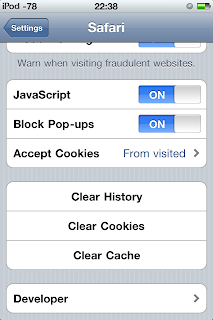 Now, onto doing that *proper* reboot. What’s a proper reboot?
Believe it or not, it’s not by holding onto the Power button until you’re asked to ‘slide to power off’. That isn’t a reboot, that’s just suspend / hibernate. The current device state is saved and hence nothing gets cleared.
What you need to do, is to hold the Power button and the Home button until the device gets to ‘slide to power off’, and then hold some more until the screen goes black, then let go of the buttons. That’s the proper reboot and that’s what clears away all the temp/cache/crap. Now exactly because of this, the boot up time is quite a bit longer than powering up from a suspend.
This is also the sign that you’ve done yourself a favour.