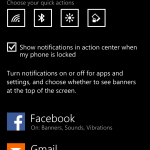 +++++ Windows Phone matures. WP8.1 has more than caught up with the competition, matching and even exceeding what everyone else has to offer. Without fully reviewing Windows Phone OS right here, a few things worth mentioning: the Action Center (exactly like Android’s notification slider) is worth cheering for but only because a centralised notificaitons system has been sorely missing. Sharing content to other apps is now possible (albeit at developers’ discretion) courtesy to the brand new Social Extensible Framework.
Live Tiles also receive a new visual presentation (wp8.1 GDR1) as it allows for stacking of live tiles and yet retaining its full functionality.

++++ Cortana – it’s very good. On the surface it would appear it’s an even more human approach than Siri is. That’s really saying something. With Cortana, you can see some of the inner workings by looking at the things she keeps in her notebook. When it asked me if I’d like to save [Location] as my work place, reasoning that I spend most of my day time there – It is both a moment of awe as it was a moment of (mostly privacy) concern. 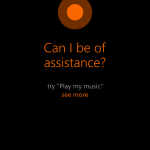 ++++ Nokia provides a huge amount of added-value with their additional apps. These all have good OS integration (a special agreement with Microsoft long ago). Examples are Here Maps, Drive+, Nokia Camera and a large handful of imaging apps.
It’s safe to assume that these may eventually be absorbed into the OS and become stock apps, depending on how Microsoft moves forward with their branding strategy.

— Lack of Google services is definitely a minus. It’s not known whether Microsoft is welcoming Google with open arms now that Ballmer is gone but other than the basic Gmail (and contacts, calendar sync) integration, there’s nothing. No Google+, no Hangouts etc
And don’t say: go use an Android then. No one should be made to abandon services from competing rivals. Life is too short for that. These things are tools, and tools that are compatible with 3rd parties, are adopted faster. Simple as that.

— app store is sadly still lacking and is probably the final barrier that —stands in the way of mass adoption. Microsoft needs to continue their effort in encouraging app developers. I mean seriously, where IS Dropbox….

– Cortana not yet available to all regions

– stability is questionable as the phone rebooted itself on the first day. Certainly not a dealbreaker because these things get fixed by updates. And certainly Microsoft has been pretty diligent with their updates of late.